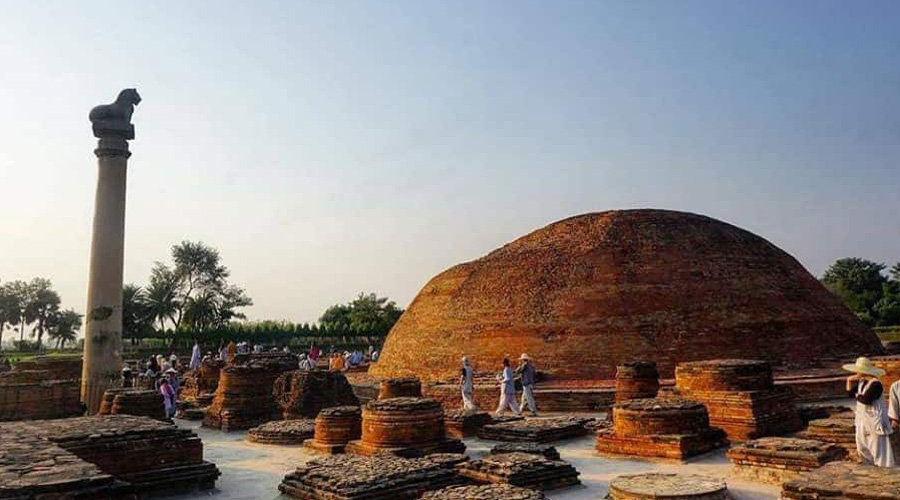 55 Km northwest of Patna, situates the significant Buddhist pilgrimage site of Vaishali. A pilgrimage to Vaishali would prove not just an ideal escapade from the cacophonies of modern life, but is also an engaging immersion in the rich historical tapestry of its heritage. The land is blessed to have borne the footprints of Lord Buddha, to have prepared the sacred chalice for many of his discourses and some significant events that mark his illustrious life. A stroll across the rural landscape lets one partake in its rich and varied history. The historical remains of Vaishali are strewn across a large geographical area of the rural landscape of Besarh, Bakhra and Kolhua in Bihar. Vaishali, which was once lost to popular imagination, was rediscovered by surveys conducted by Cunningham and Stephenson in the nineteenth century. The writings left by Chinese traveler Hiuen Tsang had been a major historical source for identification and verification of Vaishali.

Vaishali – A Site of Many Remarkable Events in Buddha’s Life

The tale ends with Buddha predicting that the monkey’s soul would soon seek rebirth in Trayastrimsha heaven. The story is significant for it points to the universal nature of Buddhist teachings- that the cycles of birth, death and rebirth as well as promise of salvation, release from the incessant Samsarik cycles, is not just open to human beings but all sentient beings. Also, Buddha received revelation about his own imminent physical demise after watching the sudden death of the monkey.

Places to Visit in Vaishali

The most prominent of historical relics in Vaishali, Ashokan Pillar is a 18.3 m high red sandstone pillar built by Emperor Ashoka. The pillar though doesn’t bear any inscriptions of King Ashoka. The pillar has a life-size statue of lion on its top. Also, a small water tank called Ramkund is situated beside the pillar. The present site consisting of this pillar built adjacent to a hemispherical, brick Stupa is said to have been the sacred ground at which Lord Buddha delivered his final sermon.

Ashokan Pillar forms the most striking but not the only major attraction in Kolhua’s landscaped park. In fact, it appears as if the 2300 year old Ashoka Pillar with its magnificently carved lion perched on its top is guarding the sacred site. Strewn around the pillar are several ruins of monastic buildings in which Lord Buddha is said to have spent many rainy seasons. This is also cited as the site in which the famous incident of monkey offering honey to Buddha took place.

World Peace Pagoda, or Vishwa Shanti Stupa, adorns the landscape of Vaishali as a symbol of tranquility and invocation for world peace. Constructed by Japanese Buddhists in 1996, this beautiful modern building is a major tourist attraction of Vaishali.

One comes across a dilapidated form of what was once a 12 m tall Stupa. Lord Buddha’s ashes were buried here, along with seven other sites across the world. Its age dates back to fifth century. If you set foot along the 5 km long single-lane village road from Buddha Relic Stupa, you would reach Kolhua Complex, famous for its Ashoka Pillar and ruins of monastic buildings.

A tour to this historical site would be deemed incomplete without visiting its archeological museum. Witness 1000 year old Buddhist statues and 1st-2nd century AD toilet pan among its notable artifacts.

How to Reach Vaishali

If you plan to visit Vaishali by air, alight at Patna Airport. Vaishali can be easily reached by road from all major cities in Bihar – Patna (55 km), Nalanda (140 km), Bodhgaya (163 km), Rajgir (145 km), Muzaffarpur (37 km). One needs to board at Hajipur railway station. It is a just a 2.5 km long drive from Railway station to Vaishali.