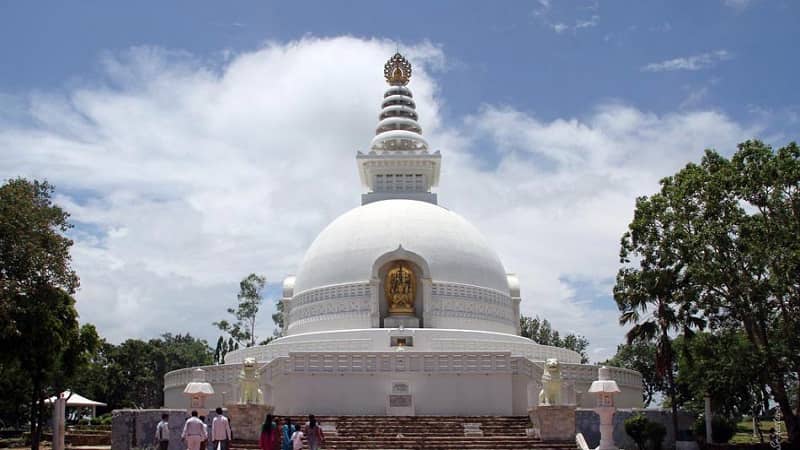 The serene ambience of Rajgir was perhaps the favorite grounds of Lord Buddha for he delivered many of his sermons at Rajgir, the then-capital of Magadha Empire, and frequented its premises often whilst he was a spiritual Teacher. Magadha, one of the ancient Indian Kingdoms (Mahajanapadas), had its capital at Rajgir before its ruler Udayin shifted it to Pataliputra (modern day Patna).

Rajgir’s earlier name was Rajgriha. Rajgir could translate to ‘abode of kings’, ‘royal house’ or even ‘Royal Mountain’. The city was also known by the name of Girivraj. The date of its precise origins has not yet been ascertained, although archeological relics from as old as 1000 BC have been unearthed from its precincts. The city of Rajgir in Nalanda district forms an important pilgrimage destination in not just Buddhist pilgrimage circuits in India, but also those of Jains’. The city has also been mentioned in Hindu Puranic texts like Mahabharata, making it a significant Hindu pilgrim site as well.

Ancient stone walls lining the five semiarid rocky hills that encapsulate Rajgir remain as vestiges of its having once been the headquarters of Magadha empire. Since many historically important sites are strewn across its terrains, history enthusiasts would find it hard to contain their exploration of its premises to a single day. Explore the green, rural premises of Rajgir by its characteristic tonga rides.

If you plan to make trips to Rajgir during November-December, try including the famous Rajgir Mahotsav, a three day cultural celebration of Indian Classical and folk art forms, in your itinerary.

Mythology and History of Rajgir

Some names the city of Rajgir is known in ancient references include Vasumati, Girivraja, Rajgriha, Kusagrapura and Barhdrathpura. One of its earliest known references is found in Ramayana, of its having been founded by King Vasu, Lord Brahma’s son.

Rajgir also finds its mention in Mahabharata, as per which King Jarasandha ruled over its kingdom. Sri Krishna fled the battle ground whilst he was fighting King Jarasandha the 18th time, after he defeated him in prior 17 battles, which earned him the name ‘Ranchorh’. Also, the city’s premises contain ‘Jarasandh ka Akhara’, the site of fight between Jarasandha and Bhim in which the king was ultimately killed.

The infamous instance of King Bimbisara being imprisoned by his own son Ajatashatru took place at Rajgir. In fact, Bimbisar’s Jail is a marked tourist destination today. They belonged to Haryanka dynasty which ruled over Magadh in the fifth century BCE, during Buddha’s lifetime.

Whilst Rajgir served as the capital of Magadh, it was known for being an acclaimed centre of intellectual and religious activity. Its sacred soil witnessed groundbreaking discourses of Lord Buddha. Also, the land was the chosen site by 24th Jain Tirthankara as well.

A famous Incident in Buddha’s Life at Rajgir

The miraculous event of Buddha subduing an angry elephant just by the virtue of his ‘metta’, loving kindness, occurred at the very premises of Rajgir. Devadatta, Buddha’s own cousin, was extremely envious of him and plotted to have him killed by letting loose an angry elephant. The intoxicated animal was about to trample a child at its feet when Buddha calmed it by touching its forehead. The animal soon prostrated before the great Spiritual Teacher and showed its reverence.

References of Rajgir abound in Jain and Buddhist scriptures. It is to be noted that the holy city is equally revered by Jains as well. The 24th Jain Tirthankara Lord Mahavira is said to have spent fourteen crucial years of his life at the very city. It is also revered as the birthplace of Munisuvrat, the 20th Jain Tirthankara. The 1200 year old temple dedicated to Munisvruta is one amongst the many Jain temples within and around Rajgir. Another important Jain pilgrimage site is Son Bhandar caves. They supposedly belong to third or fourth century AD. Earlier mistaken as Buddhist sacred sites, the caves are significant to Digambar sect of Jains. Also, there are over 26 Jain Temples situated around the hills of Rajgir. Reaching them can prove quite difficult for the untrained, but if you are seeking a strenuous trekking experience, a pilgrimage to them can prove quite ideal.

How to Reach Rajgir

By Air: For domestic travelers, Patna Airport would prove the nearest. Though, the nearest international airport is at Kolkata.

By Road: The city is well connected by road to all nearby major cities like Nalanda, Rajgir, Bodhgaya and Gaya.